“The eye sees a thing more clearly in dreams than the imagination awake.” 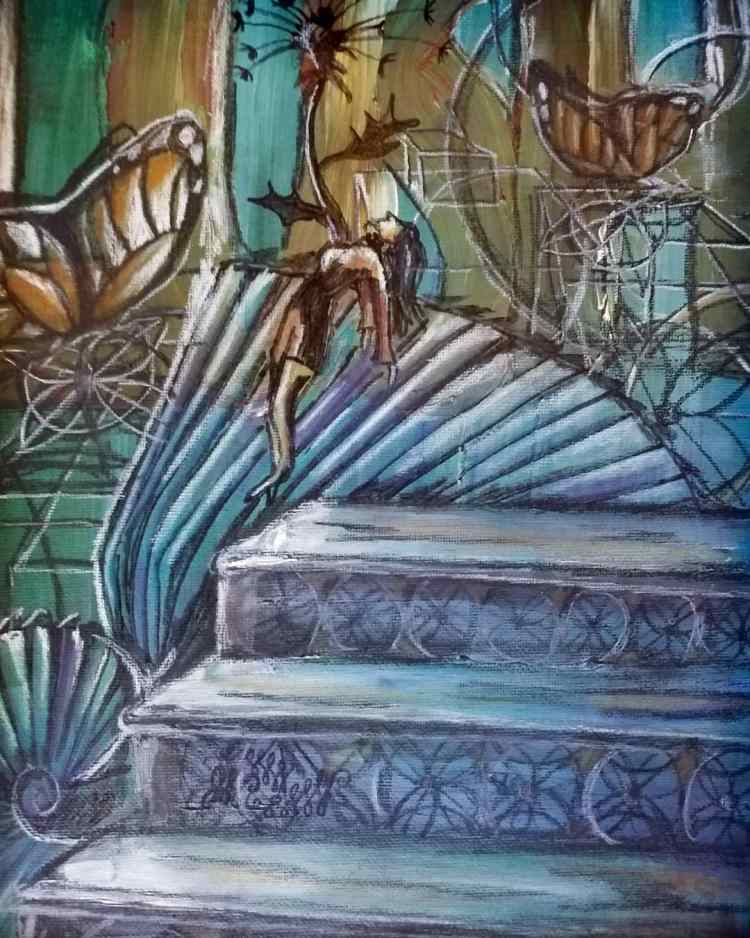 Liz looked down at her phone, desperately trying to figure out how to text, “WAIT FOR ME,” to Chris.

She had been in the interview process from the moment the sun rose ’til it set beyond the streets in some far-off land. She was late picking up Chris to walk back home, but it was necessary to stay put for the hiring managers were going to make their decision at 5pm sharp.

Only two people received the blue passports for entry into the celebrated avant-garde wing and that was her and her mysterious competitor. Out of hundreds and hundreds of applicants, who now waited for their final dismissal or entry-level positions in long laborious lines while grasping the red passports in their hands. It looked like a cattle shoot, while Liz sat at the large round table alone, raised above the rest, awaiting her final verdict.

It seemed like life or death to her at this point and she hadn’t walked in that morning even considering such a prestigious position. What that position was, remained a mystery, even to the deciding higher ups. The only one who knew was the Universe itself and the Scientists who roamed the upper levels in the maze of hallways and corridors.

Again, while waiting excitedly, Liz tried desperately to text her friend to beg him to wait for her for the walk home in the setting sun. She hated anyone to have to find their way home alone, especially if they were unfamiliar with fantasy. Such as it were in dreams. We always seem to be in some place new, yet familiar, yet lost. She was incapable of using everyday, modern technology. Most likely because she was whisked off into another world all together, where things of the past had no use and were difficult and tedious to manipulate.

“Chris, my car isn’t steering right. I think it’s shutting down on us,” she said in a despairing tone as she rounded a culdesac on the way to Chris’ sporting event.

The sun was just rising over the hills and beyond, they could see the arena.

“We may have to walk,” Chris said reluctantly.

“That’s 5 miles in these cold streets and it’s still dim,” she complained. But she knew she had no choice. She had to be somewhere for something, of what she wasn’t quite sure until she arrived.

The two friends walked the quiet streets and fields in this unknown world, hand in hand and step by step. Even though she didn’t know what she was in for, she felt his support as thick as the clay they walked upon that morning. He walked with a sacred gate, almost as if he knew she needed him to slow down and be there for her. Did he already have a premonition of what was about to occur? Such is life in the sands of a dream.

They reached the arena, where Chris had to partake in the game. It was a game not unlike soccer. It was as important to him as this next step in her life was to herself. So, she let him go as she trudged on for miles alone into the future.

She reached a modern looking building under the impression she was up for an interview of sorts. It seemed to be for a creative position, in her seeing eyes. The doors were solid blue glass, reflecting the multi colored prisms of color filtering through in the sun in two distinct directions. It reminded her of high-quality crystal from her world below, cascading rainbows into the atmosphere.

“State your name,” a loud speaker blared and echoed from on high.

“We have been waiting for you dear. Step aside,” she summoned her in through a hologram that suddenly manifested on over the walls and front glass doors. As she approached the enclave, the doors opened inward towards the lobby, with a rush of air that pulled her deeper within.

A matron approached and greeted her, ever so sternly. She wasn’t late. She was right on time. After all it was her dream. Her imagination.

“We have the ladies set up downstairs, if you will follow me. We have projects for you, Elizabeth.”

Panic rose up in her stomach, as the memory of her most recent occupation bombarded her mind. All the false memories of inadequacy filtered through her gut, sending adrenaline coursing throughout her veins. She read the matron and knew right off the bat, that this was serious business and they weren’t messing around. There would be no such thing as singling someone out on their creative abilities…not at this point anyhow. They ultimately were not interested in skill at all, as Liz came to find out later on in the studios. They were interested in her alone. A holy curiosity rose within the entire building, people buzzing about upon her final entrance into the halls.

The ladies who had already been there for their interviews knew of her status, but didn’t let Liz in on that fact. Their ill centered ways and jealousy were palpable and cut into her heart like sharp arrows. “I already don’t fit in,” she mummered to herself.

The woman took her hand and asked her to take a seat on the floor amongst the prying eyes and sickly souls. Spread before each of them were folders and magazines for collage work. They each had 20 minutes to put something together that would leave their peers speechless. Most of the ladies focused on fashion and beauty. Liz decided to focus on her emotions in this time. The competition was cut throat and the sands of time turned on its head and the countdown was on. The matrons watching over each, had other agendas other than to encourage beautiful work. They were trained professionals; psychiatrists, scientists, and psychologists in disguise. Each one looking on to see how the guest of honor handled her stressors.

Panic set in and she got to work, cutting out words in magazines that best described her feelings. She was rushed, and the more she rushed, the harder the cutting went. It was frustrating to say the least.

All the while, each and every single lady there up for the positions, had been given a head start, so Liz was under extra pressure. All in the cards, as the matrons all knew. One by one, each and every lady berated and questions her motives….”What are you cutting that out for, where were you, where did you come from?” This wasn’t the time to be chattering away. Liz worked best in silence and under minimal amounts of stress. Not under a barrage of inane and silly questions, all meant to demonstrably distract her.

“I can’t hear myself think,” she panicked as the clock ticked on, becoming louder and louder as the minutes wore thin.

Suddenly a new over-seer snatched up Liz’s folder full of cut outs, words and pieces; taking it away from her so she couldn’t finish.

Frustrated, angry, and flustered, Liz followed the woman to her Marketing desk. She was causing a commotion amongst the workers and a head matron followed them in. “Why did you take that,” she motioned to get the folder back.

The head matron calmed her down and said, “About how much time did you get to do this project, Elizabeth?”

“Well, 20 minutes had been up a long time ago, dear. We have to look at what you have done, finished or not,” fully well knowing what she had already created was far superior to the prying eyes of the souls below.

The Marketing manager looked Liz sternly in the eyes, “We have to look through your work, bit by bit, Elizabeth. Very thoroughly. Very thoroughly and in its entirety. Have a seat, this will take some time.”

Liz thought she was in trouble, but it was very far from the case.

Suddenly Elizabeth felt the light burn into her eyes. She was rising in the atmosphere in a sterile white room, with flat bulbs of prism light burning into her skin. She was levitating above the room and to the complete surprise to all scientists within eyesight.

Upon consciously understanding her heightened state, above the air in the room, Liz opened her eyes only to look back into bright white lights inundating her retinas. As soon as she opened her eyes and felt the warmth from the bulbs, she started to descend toward the floor.

Sprawled out and quartered, Liz looked up into the doctors and the scientists bright white faces only to be told that she was levitating for more than 20 minutes, something none of them have witnessed before.

“This is your profile shot, so to speak, Elizabeth. We are taking you under our wing in this studio to take photos of before and after to place in your portfolio. This is all in preparation.”

Sedated and comfortable, she groggily walked to the mirror. To her surprise, her eyes had been transformed into rainbows of color, not unlike the prisms she had seen outside the building upon her arrival. Her cheeks were flushed and warm to the touch, with small pock marks and red bumps showing up on her skin. She looked refreshed though, almost 10 years younger. The levitation had made her go back in time.

“Don’t worry, those will go away in time,” one Scientist said softly to her. She knew he was of a different world all together. But she felt at ease in his presence.

“What just happened,” Liz gasped? “What am I being tested for?”

“For a very honorable position here, my dear. You have outrun the rest and we will make our final decision this evening.”

They led her through corridors, where more young scientists shouted, hooted and clapped as she was led in the arms of the others. They marched up the steps one by one, glancing sheepishly in her direction, knowing of her now providential status over them.

Confused, Liz took a seat at the round table, where a mess of red passports laid bare for others to gather.

A matron comforted her, and ceremoniously wrapped a string around her neck, tied to it … one of the two blue passports left on the table.

“We will make our decision at 5. There is one other in question.”

Liz pulled out her phone, trying desperately to text Chris again. “Please Wait for me, this is important” she tried typing. But it was of no use. Her technology didn’t work there. And it never would again. She was in a new world, welcomed whole heartedly as the head.

She woke up out of her dream at that point, still feeling the burning sensation from the bulbs on her eyes and the weightlessness of her levitated state. Carrying it through in real life, she will succeed in the next steps in a humble affair. She will take this with her and raise a dream into reality.

She never did get to walk Chris home, but that was of no matter. He was on his path. And she was now on her own.

Through the Looking Glass - The Flipside of Bipolar & Recovery. View all posts by OnTheRocks